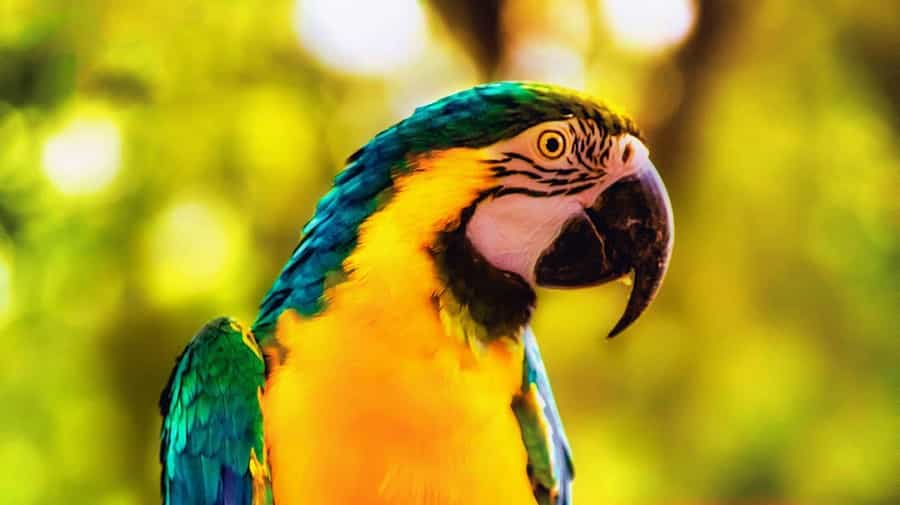 Macaws are parrots from the New World that can be easily separated from other families of parrots because they have larger beaks, long tails, and relatively bare, light-colored, medial (facial patch) areas.

Macaws are also members of related groups such as parakeets or cockatoos.  Popular across the world, especially in captivity or as pets where breeding has held up well. Members of these species range from the Amazon to Argentina and usually feed on seeds and fruits!

Macaw parrots are long-tailed and very colorful parrots, that belong to New World Parrots. These parrots are very popular as companion parrots because they are very friendly and trained parrots category. Nowadays in many types of morning shows, Macaw Parrots are present to make the shows colorful.

Macaws are natively from Central America, Mexico, the Caribbean, and South America. Most species of Macaws live in rainforests belongs to forests while some prefer woodland. Young Macaws have grey or black eyes while this color changes to brown or yellow when they become mature macaws.

Macaws have a slim body with strong beaks and long color tails as long as their body. Their strong beak is helpful in breaking nuts and has long feathers also. Which helps them to fly smoothly. Macaw can fly up to 35-60 km. They can fly very smoothly even in dense forests with their long feathers. 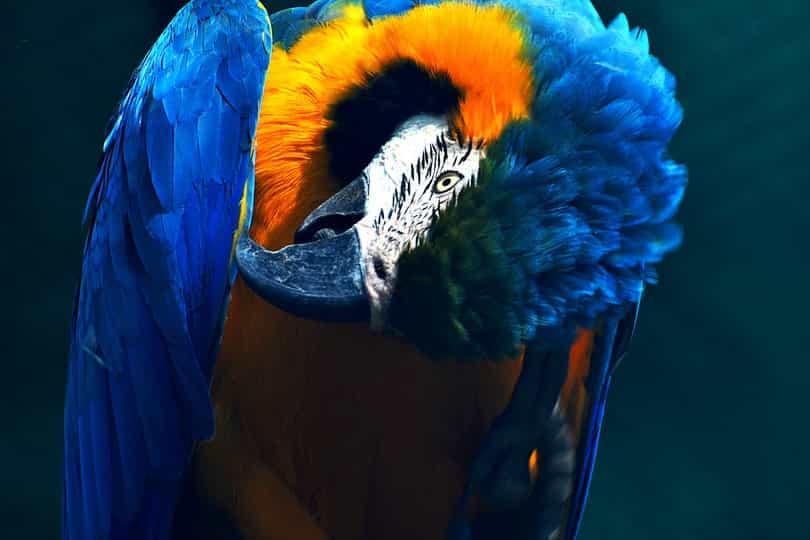 Differentiate Between Macaws And Other Parrots

A colorful body, long-tailed, larger beak, facial patch areas may differentiate macaws from other parrots. Sometimes a facial patch is just to yellow shade around the eyes or some have a smaller facial patch and a second patch below the beak. Macaw facial feather pattern is as unique as someone’s fingerprint differs from all.

Macaw species are 19 including extinct and critically dangered species. There are some species also which have been reported on very low percentage or some hypothetical.

Extinct and Endangered Species of Macaws

The reason behind extinction and endangered is on a large level of deforestation and illegal trap of birds for trading. Native American, American Southwest Farms are established for them and these farms are known as Feather Factories of Macaws.

For stopping the illegal trading of Macaws some species, there have been done some steps like issuance of trade permits, establishing an export quota. Few species like Scarlet Macaw are not allowed to trade in the world anywhere. Similarly, some other endangered species of macaws are restricted for trade.

The hyacinth macaw is a parrot native from central and eastern South America. It’s the largest macaw in the Macaw family having an almost 1-meter length from head to tail and almost 1.2 to 1.7 kg weight and is this macaw is included in the largest flying parrot species. Each wing length is 38-42 cm with a long tail. feathers are entirely blue and lighter blue on above. Hyacinth macaw has a ring around its eye and vibrant yellow underneath the strong beak.

The hyacinth macaw eats nuts, vegetables, different types of seeds, nectar, and fruits. Their favorite feed is Brazil nuts from native palms. As they have a very strong beak for eating hard nuts and seeds. their strong beak even can crack coconuts. Hyacinth macaws fly in pairs and feed on hard nuts.

While in captive, it is not possible for everyone to provide palm nuts, which is native food for Hyacinth Macaw, so in replacement of this nut, the macadamia nut is best and most nutritious for your parrot.

Hyacinth macaw breeding season from July to December. it normally lays one or two eggs in a breed through which only one egg hatch fully. sometimes both eggs hatch successfully. They can breed 2 times in a season. The incubation period of Hyacinth Macaw is almost one month. After hatching, the chick leaves the nest for almost 110 days, while other chicks remain dependent on their parents. Hyacinth Macaw breeding age almost 8 years, they breed first time at this age.

Breeding Age of Macaws / At What Age Macaws Breed

Macaws reach their reproductive age after 7 years almost at age of 8 years Macaw Breed. Once they adjust with hen macaw, they will breed regularly. Different macaws have different incubation periods for their eggs. Also, the number of eggs they lay, different from Macaw type to type. For example:

Macaw is an intelligent parrot, always curious, alert about its surroundings. Macaw parrots are very companion and spend most of their time with their flocks, with family, and enjoy with them a lot. Macaw sleeps on trees in forests and in the morning they fly with their flocks in search of food and travel miles for this purpose.

Macaw likes lot playing with water and often seen splashing around in the water. They spend a good amount of time chewing wood with their beak, and this chewing wood sharpens their beak.

Macaws have loud and squawking voices during their flight. They use these loud voices to call their mates from their roosting places.

Macaws are monogamous, which means that once they make the bond with each other then this bonding stays at last. When pair of Macaws join flocks, they remain close to each other except when female macaws on eggs or with young ones.

Pair of Macaws feeding while roosting in trees their young remain close and even when they fly with flocks, they remain close to each other, their feathers are touching. In captive breed Macaws, they feed their young about 15-20 times a day.

Some foods in certain areas where Macaws fly eat toxic or caustic food which they digest. For digestion such as toxic or caustic substances, macaw eats clay from exposed river banks in Amazon Basin.

As Macaw Parrot is large in size so by keeping in view its size, the Cage size of Macaw parrot should be ( Length x Width x Height ) (6 x 8 x 6). In such a size cage, macaw parrot can flare up their wings fully and widely, in this size cage, Macaw Parrot will be happy.

There are major 4 types of diseases in which Macaw can suffer.

Kokra / Cockra is a local name of the disease which is commonly found in Macaws. In this disease, Major Symptoms are Macaw get lazy, response time or unable to respond frequently, hide head into its feathers, avoid food eating.

Seep / Rani Kheet is another disease that is very common in Macaw parrots. Symptoms of Disease is :

Heart Attack is as common in birds also as in Humans. In Macaw the ratio of Heart attack is very low, but no one knows when this happens. Macaw is sitting well and suddenly fall down, may suffer this attack.

Paralysis in macaw parrots can happen suddenly. It is also called in the local language “ Falaj Attack in Macaw Parrots”. When paralysis attack on Macaw Parrot, parrot becomes one side down, which means, one side of parrot is dead, the neck becomes molded backside, macaw fall down.

Sometimes due to climate change or due to heat or some eating not suitable food, Macaw parrots suffer in temperature. Because of this, Macaw Parrot becomes lazy and starts eating less diet and body becomes heat up. Another reason of suffering temperature, if travel Macaw Parrots from one place to another place in long traveling then tiredness is the reason of temperature.

Dieaheria in Macaw Parrots or lose motions in macaw parrots is another disease that can hit the parrots. In this disease, macaw parrot pits become in a loose shape, not in solid shape, so keep notice that your macaw parrot is fit and its pits notice.

Treatment for macaw parrots against the above-mentioned diseases is here discuss disease-wise.

In Seep Disease or Rani Kheet Disease, Garlic is also helpful and its liquid is also a good antibiotic for macaw birds. Calcium supplement is another treatment for macaw parrot in Rani sheet disease.

If Macaw parrot is suffering fever due to weather change or due to traveling tiredness, then use panadol syrup or brufen syrup 5 drops in 1 teaspoon water 2 to 3 times a day for 3 days. Your macaw parrot will be fine.

In Diaheria Disease, must use Flagyl syrup drops. 5 drops in 1 teaspoon at least 5 days and twice a day. Focus on your macaw parrot, your parrot is getting better or not.

How To Train Your Macaw Parrot / Macaw Training

Macaw parrots are not easy to train. They are very moody parrots. People who try to train them, at the start they motivate them to food because Macaw Parrots like food very much and this food activity motivate Macaw parrot to learn the different things like climb on a stick, lunging, noisy, biting chewing activity.

Macaw Parrots lung people suddenly, especially strangers. They use this technique for security purposes. The trainer teaches their Macaw that how to control such type of behavior. So when they learn this technique, macaw parrots this lunging with people to get enjoy themselves and as fun.

Chewing is another habit of Macaw parrots that can be controlled by training them. They chew toys, sometimes electric wires, and if their box is wooden and not properly shielded then they chew the box.

Q.No. 1 How much does macaw parrot cost?

One can buy Macaw Parrot online from different platforms like websites, Facebook groups, from Whatsapp groups. In Pakistan, Macaw parrots for sale are available from different sheds of parrots which people developed for business purposes.

Macaw parrots live almost 80 years. They have very strong immunity against climate and different diseases, so they can live long.

Macaw parrots are a very beautiful combination of colors, they have a high ability to mimic human words. Macaw parrots can talk and can mimic around 100 words and also use these words in their context.

Macaw parrots are very friendly birds, one can train them and teach them words mimicking. Fancier peoples keep them at home for their home beauty because of their beautiful colors, in short, macaw parrots are good pets.

In the Macaw parrots family, it is hard to differentiate between a male macaw and a female macaw. Both look alike the same. Only DNA testing is the mechanism through which one can find male macaws and female macaws.

Q.No. 7 Why Parrots Grind the Beak?

Parrots grow their beaks throughout their entire lifespan. It’s a myth that they only grow during their youth or adolescence – which is why it’s important to keep your bird well taken care of with regular exercise and healthy food as to grow strong bones, lean muscles, and even a big appetite.

Imagine you have a knife you want to keep sharp, but the knife actually grows larger every day. It must be ground down and sharpened otherwise it would get too big and heavy to use effectively.

A parrot’s beak would grow to the point that it could no longer eat would essentially make the jaws permanently open, but the beak fills the open space, making it impossible to open any wider to get a bite. Starvation is a terrible thing.