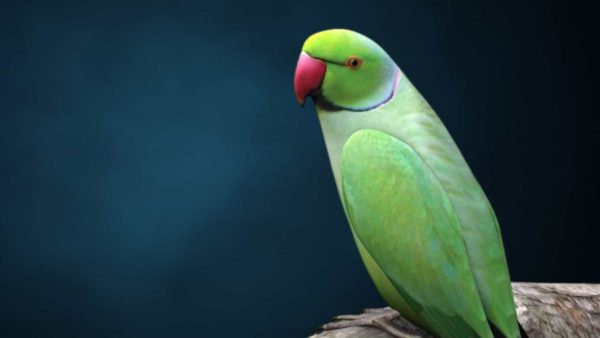 As Raw Parrots are very moody and because of their harsh attitude, Raw parrots make their couples not very easy. Here we discuss some factors of Breeding Alexandrine Parrots like at what age Raw Parrots breed, how many raw parrots lay eggs, what is incubation period of Raw Parrots

Raw Parrots breed at age of 2 and a half years age almost. In captivity, they breed sometimes at age of 2years but most probably they breed after 2 years.

Breeding Raw Parrots mostly like deeper nesting boxes, boot-like shaped. Such type of nesting boxes, breeder female raw parrot feel security and safety. Most nesting boxes are wooden, but for Raw Parrots, these wooden boxes must be covered with metal plates so that if they bite and chew the wooden even then outer side plates secure them.

How Many Lay Eggs / Clutch Size

Female Raw Parrot breed 2 to 4 eggs at 1 breed. Alexandrine parrots breed a maximum of twice in a breed season;

Female Raw Parrot sits on eggs regularly and their incubation period is about 26 days.

When Do Alexandrine Parrot Get Ring

Around 18 months of age, Alexandrine Parrot gets their ring prominent and if not appear at that age then almost up to 3 years age, they get a ring around their neck. 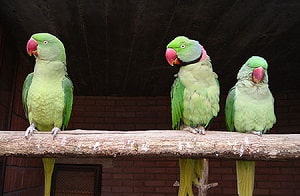 It belongs to the Psittacidae family. The reason behind calling Alexandrine Parrot is that The Great Alexander exported the bulk of these birds to European Countries from Punjab.

The Alexandrine Parrot has developed a bulk of the population in Belgium, Spain, Germany, and other countries of Europe. They live along with the feral population.

Raw parrot is almost 20 to 22 Inches long from top of head to tail end. Age of Raw Parrots almost up to 30 years. Now a days, people keep them as pet and they are also best companionship bird, their ages are more than 30 years. Raw parrot has 11 to 14 Inch long tail, dark red beak, red dominant sign on shoulder, yellow-green abdomen and yellow tips. Top side of tail is green and the inner side of tail is yellow.

Raw Parrot in the wild lives in a small flock. Mostly in wild, Raw parrots see on the ground for food. They feed on a variety of food like dining on blossoms, seeds, fruits, and naturally produced seeds. They are in the wild live in tree holes and feel very comfortable there.

Differentiate Between Male and Female Raw

Raw parrots are sexually dimorphic. Adult Male Raw parrot has a dark stripe across its lower cheeks and dark pink band on its nape while female raw parrot has lack of both which means, light black color strip crossover cheeks and light pink band on its nape. While young Raw male and female have both same like appearances but male raw has a short tail.

Raw Parrots are very amazing birds as Pets. People train them and feed them by hand. Win the trust of Alexandrine Parrot. Raw parrots have very positive gestures like beautiful color complexion, nice bit of size, and reddish sign on their shoulders. By care, love, and affection, Alexandrine parrot as pet is a very good selection.

Raw Parrot starts talking at age of 1 year normally, but if you care and have good interaction with your alexandrine parrot, then at age of 8-months they start talking. Once they start talking then they have the ability to pick up the words that you pronounce around them. They have a very good vocabulary and are very intelligent to observe their surroundings.

Both male and female Raw Parrots can talk but male alexandrine parrots are better than females. Raw parrots are good in intelligence and keep words in their vocabulary. They start talking at an early age and have good, nice, and clear sounds.

Every talking alexandrine parrot has its own sound. They usually do not copy household people’s voices. Raw Parrots are not a good choice to buy as talking parrots, because only those Raw parrots start talking which are exposed to humans and household persons. Those Raw Parrots talk which starts talking at age of 8-months almost like in their childhood. 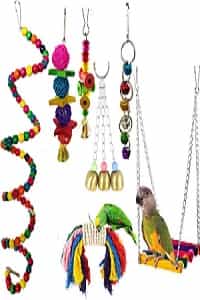 Raw parrots are very in those parrots category who enjoy playing with toys a lot and spend a good time with their toys. Toys for Raw parrots be in bright colors and like most chewable toys. Alexandrine parrots have mostly aggressive behavior so they keep on chewing or keep biting on wooden sturdy toys. In their toys list, swings, plastic beads, leathers, ropes.

Raw parrots need very attention and care of their owners. Mostly they have aggressive and destructive behavior when you ignore your bird. Raw parrot’s behavior suddenly is in sad mode if you do not care for them and do not spend time with them.

Raw Parrot behavior becomes good when you spend time and have fun with them. Speak words and they respond to your vocal. Their mood becomes fresh.

Raw Parrot’s cage must be enough where Raw parrots can flip their feathers without touching or unable to open full feathers inside the cage. Cage size almost

Because when feathers touch the cage sides or are unable to open feathers then their behavior becomes very destructive and become depressed. 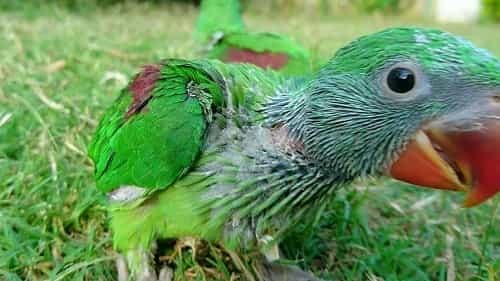 Baby Alexandrine parrot or Pahari chick grow rapidly and weaned themselves very speedy. Up to the age of 6 to 8 weeks, hand-feed on regular basis to Pahari chicks, when they come to themselves and show more interest in fruits, vegetables and pellets then start these items feeding them. 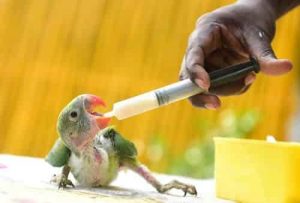 Raw Chicks mostly refuse to feed themselves and large feedings. After the age of 10 weeks, they start feeding self then start feeding with fruits, pellets, and vegetables. While under the age of 6 weeks, if Pahari Chicks remain in the nest then breeder mother

Raw baby parrot from neonate to the transitional stage, pass on 6 stages. Here we discuss briefly these stages.

This stage remains 3 to 4 weeks, after hatching raw chicks. Their eyes are closed and they need the extra care and food and warmth of their mother. At this neonate stage, Pahari chicks are just a piece of flash.

At this stage, Raw chicks open their eyes and are more curious to know about the surroundings, but still unable to feed themselves. This stage remains also 4 weeks. This is the time you can remove from their enclosure, and introduce them to the humans, so Raw chicks can start learning words. More curious to explore the foods, eating sipping water.

Fledging is the stage where Pahari chicks start to learn how to fly and they experience this joyful flight and explore the surroundings where you will keep them. Need to focus and care for them a lot.

Weanling is the stage where Raw chicks become fully weaned and start to feed themselves. The weanling stage remains 3 to 4 weeks.

The juvenile stage means, the pre-adolescent stage of Raw chicks, where they become fully independent but not fully mature. Very aggressive and moody stage this is, keep very much care of your bird and keep your raw chicks happy

After the Juvenile stage, Raw chicks now become mature and fully able to hatch raw chicks. After the neonate stage from day 1st, about 2 or 2 and half years after they are ready to make their new couples and shelter.

How To Keep Raw Parrot As Pet At Home

Raw parrot as a pet at home needs a large and thicker cage with powdered coated bars and not more than 1-inch space in each bar. A large cage is needed because of the long tails Raw parrots have & coated bar is needed because they chew the bars and try to molt or cut them. Spacing of less than 1 inch in between each bar for saving them that try not to hurt themselves in squeezing out.

Iron rod or rose wooden coated perch must be placed inside the cage that is not chewable. The bottom of the cage, grill, or moveable tray must be placed so that easy cleaning is possible and your parrot is unable to touch their dropping and rancid foods fall to the ground of your cage.

Food and water bowls do not put underneath perch, because food and water will be contaminated very soon by their droppings and that makes your parrot ill.

In fruits such as apples, pears, kiwis, oranges in the sliced-shaped cut. Big shed owners, may prepare the food cutting at once and then they distribute it in a week among their Pahari Parrots. 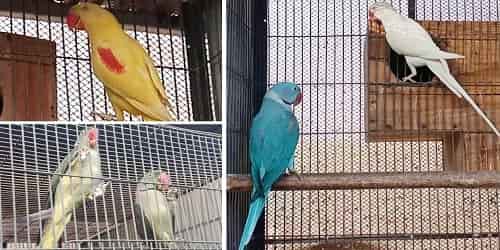 Yellow Raw parrots consist of Yellow full wings with red lines on their wings. It is a very expensive Raw mutation.

Blue Alexandrine is another expensive mutation of Raw. Blue Raw has a red line on their blue wings.

Full white body with red line on White Alexandrine or White Raw is another precious and expensive mutation of Raw Parrots.

1. When do Alexandrine Parrot / Raw parrot get the ring?

Alexandrine parrots are sexually dimorphic, can easily be differentiated between males and females. A male Raw Parrot or Male alexandrine parrot has a dark circle around the neck, having blue and pink shade in the ring while a female doesn’t have a ring. At age of 18 Months minimum, Alexandrine Parrot gets a ring around their neck and it will become fully visible up to the age of 3 years.

Raw Parrot / Alexandrine parrot start talking at age of 1-year average but if one care and spend time with them then they start talking about 7 to 8 months. Male raw parrot has large vocabulary than female and more sharp and has picking the words sense is high.