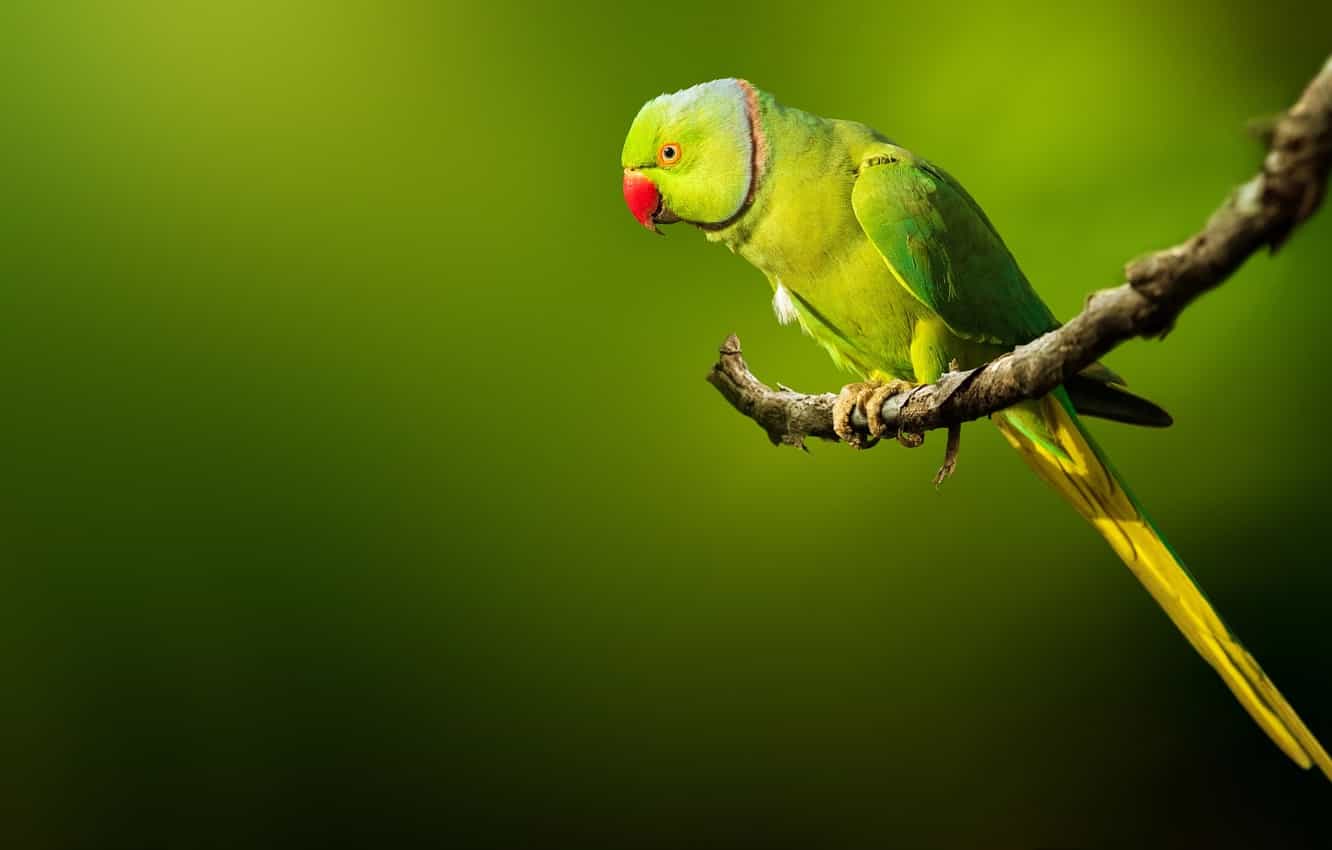 What are common types of parrots in the world? A common question but a detailed answer. Types of parrots above 350 in terms of species. Let’s explore parrots more so that you can understand which parrot is good to keep as a pet. Parrot species are spread across the world. Amazon has countless species of living creatures same way a lot of parrots are present in the Amazon.

Many beautiful parrots live in captivity because of their natural beauty people like to keep parrots in homes. Parrots are not only beautiful but also intelligent birds. Some parrots tend to have the capacity to learn human words even sentences. That makes even feel great if someone has a speaking parrot. You can check parrot facts in detail 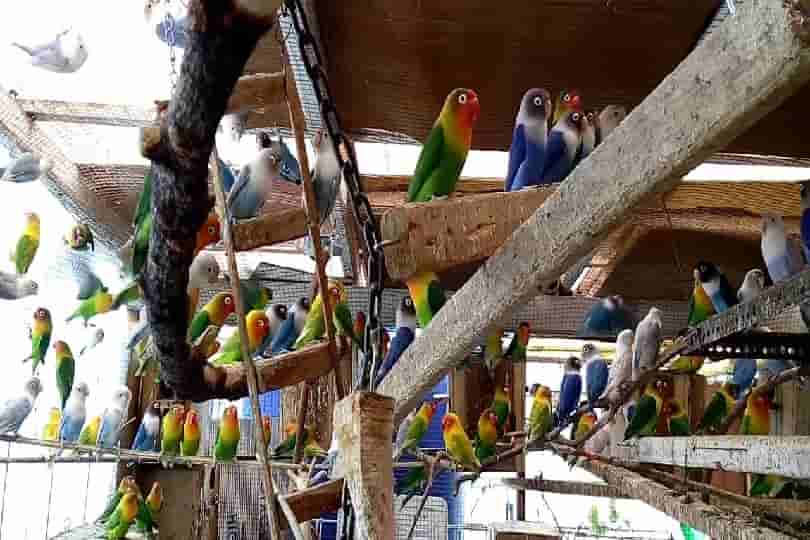 Interestingly parrots types are different in different regions of the world. I am working to study various parrots and their traits along with my team. I hope this write-up will be helpful for you a lot. Do write to us if there is any feedback from you.

Types of Parrots By Size

Parrots are a very common pet in homes around the globe, with over 350 species known to exist and new species still being found. Parrots are unique in many ways, including their talking abilities, they’re very social animals and often learn to talk very easily.

While some people prefer to keep parrots as pets, others enjoy watching these beautiful birds fly in their natural habitats. With all the different kinds of parrots, it can be hard to determine which kind of parrot to get.

Parrots can be generally categorized by size into four categories: small, medium, large, and extra-large. For a better understanding, we will discuss each category in detail with accompanying pictures of representative parrots.

There are many different types of parrots in the world, but the small parrots in the parrots family are some of the most beautiful and intriguing. These little birds are native to tropical regions and are known for their brightly colored feathers and playful personalities.

While they may be small in size, small parrots pack a big personality. They are social creatures that love to play and explore, and they are often very affectionate with their human companions. These little birds are also very intelligent, and they can learn to mimic human speech and other sounds.

If you are looking for a fun and loving companion, a small parrot from the parrots family may be the perfect pet for you.

When we categorize parrots by size then the medium size parrots are some of the most popular. These parrots are just the right size for many people, and they have a wide variety of colors and personalities.

Medium size parrots are also relatively easy to care for, and they can live for many years with proper care. These parrots are social creatures, and they enjoy being around people and other parrots.

If you are considering adding a parrot to your family, a medium size parrot may be the perfect choice.

While the large size parrots are very intelligent, they are also very social. They can live for about 60 years in captivity and are very affectionate.

Their need for human contact is the reason why these parrots make the perfect choice for anyone who is alone a lot. They have a love for music and have a very large vocal repertoire that makes them a joy to train.

They are excellent mimics and can get along with almost every other pet. The African Grey Parrot, despite being a large size parrot can be a wonderful pet for children.

They are very tolerant of rough play and can get along with other kids, cats, dogs and even other large size parrots.

There are many kinds of Parrots that exist in Pakistan and India. As in the majority parts of both countries, Pakistan and India’s climate is almost alike parrots types in India are the same as parrots found in Pakistan. The following list will facilitate you to learn a lot about these birds. These types are enlisted as follows and details of each type are also present for you. 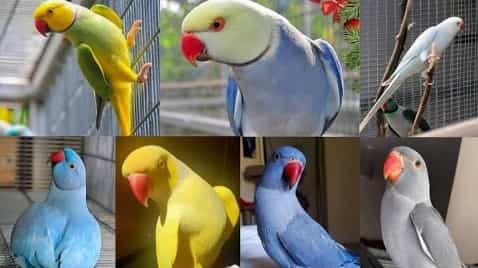 Ringneck family of parrots are very beautiful. As reflecting from the name, ringneck, each member of this family has circled around the neck.  Ringneck family members are:

White RingNeck:  This parrot has a long nice tail which adds more beauty to it. 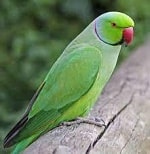 Blue ringneck: Blue ringneck parrot is also known as talking parrot. It has a sweet voice and a quick learner within 6 months to 1 year. It has a long blue tail which makes it more nice and beautiful 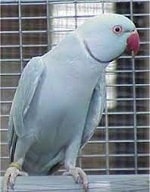 Grey ringneck parrot is rare mutation of Green Parrot. They are increasing within the area as people keep them at home for breeding. Its male has a black or white ring around neck and female don’t have a ring but looks beautiful. Grey ringneck attracts Fancier people, its beautiful ring and body gesture, feathers, people like to keep their homes It has a charcoal color and many shades of grey.

Rainbow Ringneck: Rainbow ringneck parrot exist all over the world almost in all countries & that’s why they are easily found everywhere. 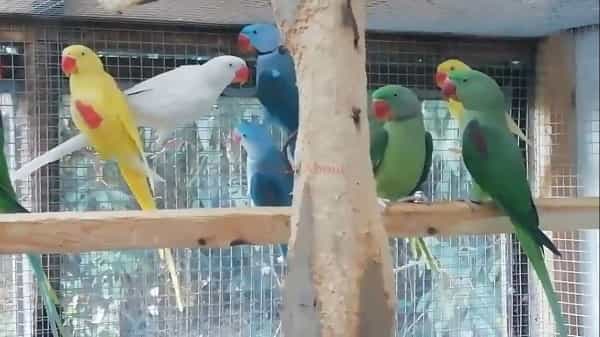 Coloring in Alexandrine Parrot is predominate green with yellow cheek and grey on the back of the neck. The yellow color of the tail inside out and blue also mix with yellow in green alexandrine parrot.

Blue raw parrot or blue Alexandrine is the largest population exist in Asia. Blue raw parrot is highly rated because of its mutation in Pakistan. Have a large wingspan about 9 inches. Resembling Indian ringneck parakeets. 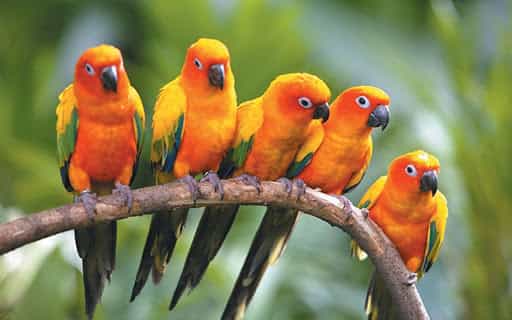 The conure parrots family has very diverse. Conure parakeet family define from small to medium size. in Pakistan conure parrots largely available. Their bright colors, greenish around feathers, add their beauty and these qualities attract the viewers to themselves.

The golden conure parakeet is a medium-sized parrot. Natively from Brazil, have full bright yellow in color. Its Queen of Bavaria in aviculture, called. While in Portugal, a golden conure parrot name Ararajuba , its means a small yellow macaw. 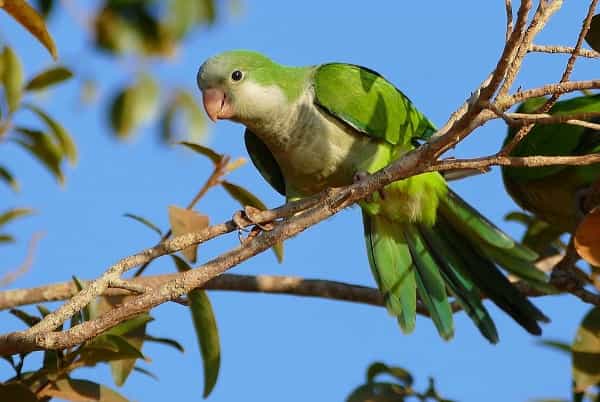 Monk parakeet is also known as Quaker Parrot. Monk parrot is part of the true parrot family. Small in size have a green color, greenish-yellow abdomen. Native countries Argentina and surroundings in South America. A large number of populations exist.

Monk parrot is the Least concerned birds that are not going to be extinct. 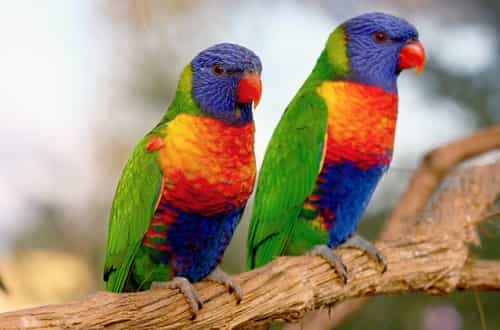 Lory parrots or Lorikeet family is small to medium size bird. Lorikeets population in the Australasian region, including Asia and Australia. Mostly lorry parrots in bright-colored. 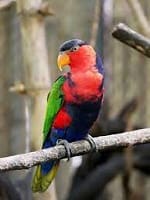 Blue lorikeet is a small lorikeet, found in the Cook Islands. Blue lorry parrot is also known as 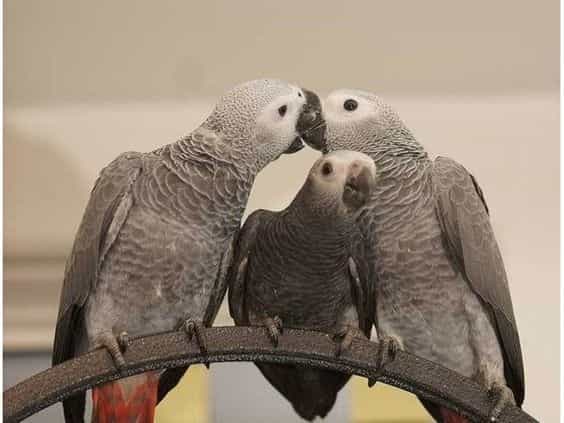 Grey Parrot is also known as 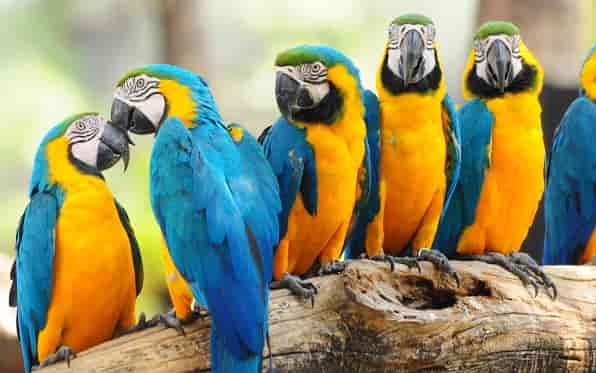 A brief of some species of macaw:

Blue macaw is also known as a “gentle giant” because blue macaw can calmer than other macaws.

Blue and yellow macaw is also known as a blue and gold macaw. Its population is feral in South American. Gold macaw has a blue top of the head, light orange below the head. Gold parrot is popular in aviculture having the quality of talking to humans, close to human bond, have attractive color. Easily available in the market. Gold macaw breeding ability starts from age 3 to 6 years. Gold macaw is on the least count category from IUCN.

A Red and green macaw parrot is also known as a green-winged macaw. It’s the largest parrot in its macaw family. Natively from northern and central America. 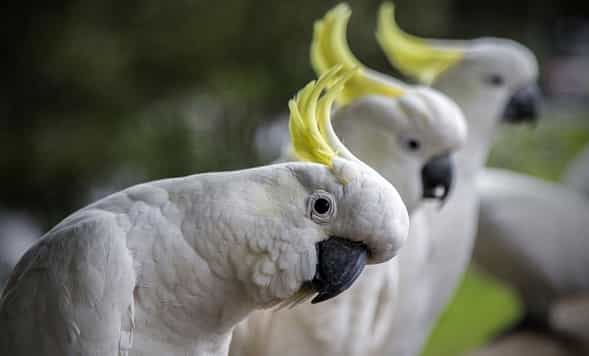 Cockatoo parrot belongs to the family cacatuidai, the only family in the superfamily. Mainly cockatoo parrot found in Australia, Philippines. Cockatoos are noticeable crests and curved bills. Cockatoo plumage is less colorful than other parrots. Mostly grey plumage, white or sometimes black plumage.

Salomon crested cockatoo is also known as Moluccan cockatoo parrot. Moluccan is banned to export in the United States as this parrot added to vulnerable species. Trapping and hunting are not allowed. Captive breeding is allowed in limited cities. 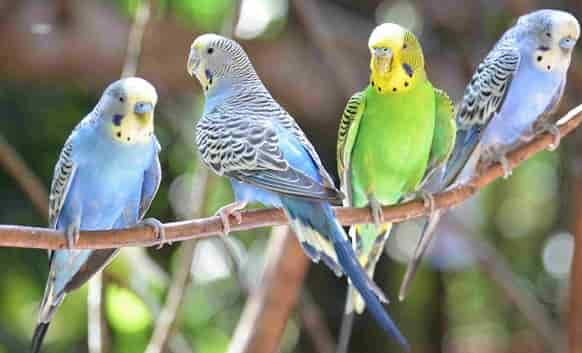 Budgerigar is also known as Budgie. Budgie is the American language is called parakeet. Budgies are in different shades like blue, yellow, green, black on tail or some have black plumage. Since 1850, captive breeding is ongoing. Very close to human interaction. Their voices make the environment very chill and cool. budgies found in Feral Population in Pakistan.

Exhibition budgies may refer to English budgies, their looks and feathers.

The Japanese “Hogoromo Budgies” are often called Helicopter Budgies or Flower Budgies. They are very good looking and beautiful parrots in Budgies Family.

Lutino budgies are also known as Yellow red eyes budgies. Their body is in full yellow color and have red eyes that’s why they are called yellow budgies red eyes. 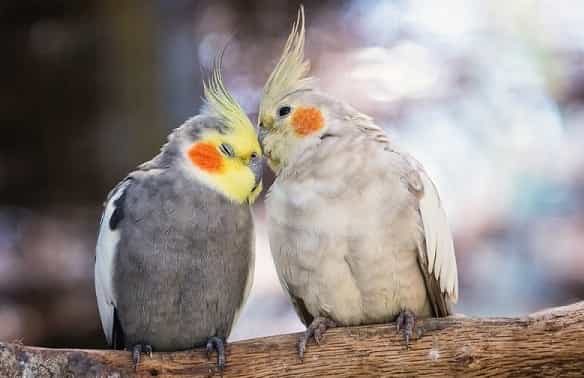 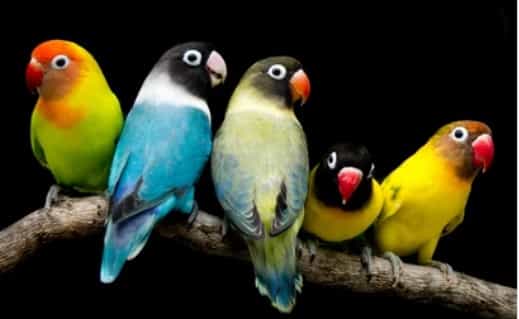 Lovebird parrots are the common name of genus Agapornis, from the old world family of parrots. Love birds have 9 different species out of 8 natively from the African continent.  Lovebird parrots are very cute and beautiful and social with humans. Low costing and effectively breeding capacity they have.

The most loving and popular mutation of the peach face lovebird is also known as the common lutino lovebird. Very friendly and companionship bird. Easy to care for.

Fischer lovebird is small in size, fast in flight, wings voice can be heard when Fischer fly. Fischer lovebird has a green chest, wings. Around neck golden yellow and dark green on the body and black on the back.

Peach-faced lovebird also called rosy-faced lovebird. Small in size, social with humans. Male-female almost same. eat through the day, sleep sit side by side, and heads into partner head.

Conclusion for Types of Parrots

My favorite is African Grey Parrots, these are native to the forests of Africa, and are one of the most intelligent types of parrots. They are known for their ability to mimic human speech, and can often be found in zoos and bird sanctuaries.

Do comment if there is updated knowledge to share. I am always happy to learn about parrots.

What are the Main Types of Parrots?

Parrots are also known as Psittacines birds, and roughly they have 398 species. Parrots are divided into three major families:

What Types of parrots talk?

Talking parrots are those who mimic human words. The ability to talking parrot is purely dependent upon the training which makes them perfect and able to talk and interact with a human. There are 3 major parrots, understand and respond the human voices and interact.

What Types of parrots you can have as Pet?

What are suitable types of parrots for beginners?

For beginners, budgies are the most suitable type because the person who is new in this field, do not have any knowledge for interaction with bird and how to care and serve bird. We write down 3 to 4 most common types of parrots for beginners:

What is the rarest parrot?

According to International Union for Conservation of Nature (IUCN), Spix Macaw extinct in the wild and enlisted in RED List.

What Types of Parrots in Pakistan?

There are many kinds of Parrots exist in Pakistan. People keep them as pet, do the business also. Here is a list of Parrots in Pakistan found:

What are the friendliest Parrots or Affectionate Parrots?

All types of parrots need care and love and time for make them friendly. Few parrots take not much time and become the best companion to human. A list of parrots reflecting the top friendliest parrots:

What food is good for parrots?

Board of Avian Veterinarian who studies the nutrition certified that pellet make 50-70 percent parrots diet. Pellets do not contain high range of sugar or dyes because this may be the reason of disease of your parrot and even shorten the life span. Budgies , lovebirds, Australians java sparrows may take these pellets.

Cooked, soaked fruits and nuts may contain high energy and that needed your parrot.

On other side , remaining 30-50 percent diet are including fresh foods like